Life at Plan B, Miscellaneous

The Plan B Wreck From Our In-Car CRASH Cam

Plan B’s ‘GULP Racing’ 24 hours of LeMons car succumbed to a classic rear-engine ‘oversteer’ spin out and subsequent guard rail encounter, prematurely ending the GULP team’s final race of the season due to crash damage. The final race of the 2015 24 Hours of LeMons season for the Midwest region was held October 10-11 at the Autobahn Country Club Raceway in Joliet, IL.

While the car was disabled due to engine and transmission damage, driver and Plan B Partner/Director of Client Service Clay Cooper was merely bruised (mostly ego). Both he and the car expect to be back in action again with a little TLC, a few cheap parts and some tricky TIG welding.

Anyone who’s aggressively driven a rear-engined Porsche 911 or old-school VW beetle, or any rear-engined car for that matter, is likely familiar with the concept of an ‘oversteer,’ whereby the heavier rear end of the vehicle gains momentum and wants to swing toward the outside of a corner when the driver ‘lifts off the gas’ a little, and/or brakes while cornering. Reducing the throttle input and braking results in a ‘forward weight transfer’ of momentum that increases the grip at the front tires, but reduces traction at the rear. If this is performed while cornering, the combination of the transfer of weight momentum toward the front of the car and the reduction of grip in the rear (due to ‘unweighting’) can cause the rear wheels to break traction and slide toward the outside of the corner.

Consider what happens when you hit the brakes hard in your car – how the front ‘dives’ forward a bit and your body wants to slide forward in the seat. This is an example of the “heavier front/lighter rear” principle in action. Once an oversteer spin begins, things can happen fast — as you’ll see in the video.

Some causes of rear engine oversteer include:

Watch the video and see these dynamics in action…

The way to correct for oversteer in this situation is to actually give the car MORE throttle, which seems counter-intuitive, especially when a driver starts to feel a loss of control as the rear of the car begins to slide. Porsche and other rear-engined car race drivers spend years mastering the control of this oversteer tendency and over time actually learn to use it to ‘swing’ a car through corners faster!

For the novice racing drivers piloting the Plan B Gulp Racing 1973 VW Fastback, the Autobahn Raceway crash was a hard-earned lesson in managing the aggressive excitement of a packed field of hard-charging cars by keeping a disciplined focus on the correct way to drive a rear-engined car. Instead of obeying the instinct to slow down when feeling a loss of rear traction in a corner, lifting off the gas or hitting the brakes, you have to ignore your gut and give it more throttle – not an easy ask under normal driving circumstances, much less when there are cars flying all around you on a racetrack!

Now for the ‘gaper’s’ details on the carnage inflicted

So, exactly how bad was it? Well, they say the ‘good news’ about lift-off oversteer crashes is that you usually hit whatever you’re going to hit while you’re moving backwards…as the car is spinning, rear-first, into the corner. When the GULP Racing VW FastBack’s rear passenger side wheel slammed into the guard rail post, the impact pushed the right, rear axle inwards, which pushed the rear transaxle (transmission) sideways toward the driver-side of the car (not good!). In this particular crash, the impact cracked the front ‘nose cone’ of the transaxle as well as the front of the engine case where the transmission ‘bell housing’ attaches to the engine.

Due to the combined damage to both the engine AND transmission, the team decided against an at-the-track repair attempt. The GULP Racing ’73 VW Fastback has a ‘late’ (post ’73) transmission that features a less-than-common nose cone mounting style that we wouldn’t have been able to find easily…

Thanks to all the latest safety equipment, including a 5-point harness, proper racing seat, quality helmet with a HANS device head and neck restraint, and a well-built roll cage, our driver Cooper walked away a little sore, but nothing more.

We’ll spend the winter licking our wounds, honing our car, and fine tuning our driving skills.

The Plan B Gulp Racing Team 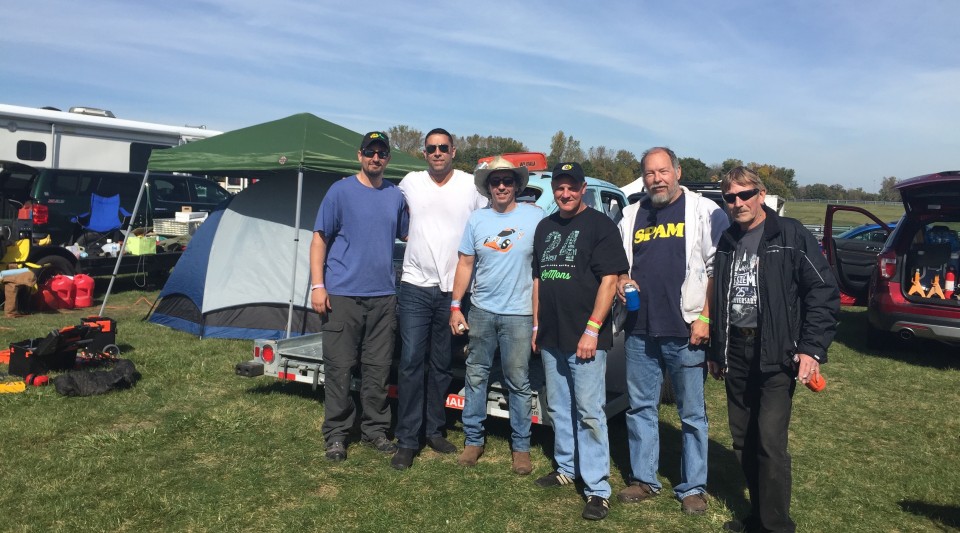 And so…as every Chicago Cubs fan knows all too well, all that’s left to say is, ‘Wait ’til next year!’

SEE THE PICS OF THE DAMAGE HERE